In a New York Times book review, evolutionist Richard Dawkins arrogantly asserted, “It is absolutely safe to say that if you meet somebody who claims not to believe in evolution, that person is ignorant, stupid or insane (or wicked, but I’d rather not consider that).”[1] In a later article Dawkins defended his words and further wrote that the “100 million U.S. citizens [who] believe that humans and dinosaurs were created within the same week as each other, less than ten thousand years ago… are contradicting—influentially and powerfully—vast fields of learning in which their own knowledge and reading is indistinguishable from zero.”[2] The irony of Dawkins’ statement is that he is the one who is woefully ignorant of the facts. First of all, most of these 100 million U.S. citizens that he cites actually do believe in evolution, but a form that does not violate the scientific method or contradict the Bible.

What do I mean by this? Can a person believe in both the Biblical account of God creating the world and in evolution? For years now the mantra of evolutionists has been that “evolution is a fact.” Anyone who opposed this belief was castigated as an ignorant, pseudo-scientific Bible thumper. However, there was never any attempt to explain that evolution must be understood on two levels. The first level is called microevolution, or variation within a biblical kind.  These small, horizontal changes within a Kind (such as the Dog Kind) can be measured and supported through scientific endeavors. These are the adaptations and changes that are documented through the use of the scientific method. On the other hand, macroevolution, which advocates the “vertical jumps” in the biological record, is still without verifiable scientific support. In other words, the links are still missing! Furthermore, Creationists and Intelligent Design proponents already accept the inferences from the data supporting microevolution. This is demonstrated by the small changes in Darwin’s Finches, the adaptive changes in the varieties of pigeons or dogs, the genetic range found in humans, as well as the tremendous variety of living things in the world today. In other words, Biblical Creationism accepts and supports microevolution![3] The problem is that macroevolutionists like to play the old “shell game.” They will tout the scientific evidence of microevolution and try to then use an “extrapolation” of that evidence as support for macroevolution. For example, a teacher may have his students look at the evidence for the changes in beak sizes of the finches living on the Galapagos Islands. He will then ask them to extrapolate backward in time and imagine the many changes that had taken place for the previous creature to evolve into becoming a bird. The first part of the exercise is scientific, but the second part is purely speculative, but they are taught to be part of the same sequence of change with just a difference in the amount of time involved. This is not only non-scientific, since the actual evidence only refers to the small horizontal microevolutionary changes within the finch family, but it borders on being deceptive. Students are led to believe things have happened when the evidence does not support the conclusion at all. We see a very clear example of this in the so-called evolution of man from an ape-like creature. Many people today believe that in some way man has evolved from previous primates, who themselves evolved from other tree-dwelling creatures, and yet the evidence does not support this conclusion at all!  When we look at the actual evidence of the most famous “ancestors” of man proposed since the time of Darwin we find that these so-called “missing links” are still missing, by the admission of the evolutionists themselves.[4] Indeed, the fossil remnants turn out to be either true men, misinterpreted animals, or combinations of human bones mixed with animal bones. Some, like the Piltdown man, were simply elaborate hoaxes.[5]

Moreover, the theory of macroevolution, or the belief in vertical changes of population groups to bring about new creatures over time, has actually been an impediment in the progress of science. It is ironic that the so-called “unifying force” in science has actually neither unified science nor brought about any practical results. You may be thinking that I am committing modern day “scientific anathema” for stating that macroevolution has no “practical value in the world of real science,”[6] but even Philip Skell in The Scientist stated “my own research with antibiotics received no guidance from insights provided by Darwinian evolution…. I recently asked more than 70 eminent researchers if they would have done their work differently if they had thought Darwin’s theory was wrong. The responses were all the same: ‘No.’”[7] In fact, the scientific method that we use today was developed by Bible-believing Christians who accepted the inherent design in the world as their starting point. Men like Isaac Newton, Johannes Kepler, Louis Pasteur, and even Galileo, started from the assumption that the consistent, rational laws of the scientific world came from the consistent, rational Designer who brought all these forces together in a way that not only showed magnificent design, but also a grand purpose. Upon reflection of our present evolution-monopolized science classes, the thing that saddens me the most is that as the Creator has been removed not only from the classroom, but also from the hearts of the students, there has been a growing sense of despair and purposelessness.

I am reminded of the maxim that “ideas have consequences and bad ideas have bad consequences.” I think we are entering a time where we are seeing the devastating results of macroevolutionary thinking on our society (abortion, euthanasia, nihilism, communism, atheism, materialism and liberal, anti-god theology), and we need to turn the tide before our society collapses. I still believe that the “truth will set us free,” and I believe that it is now time to allow true science into the classroom, or perhaps I should more correctly say a “true view” of science. Why should we settle for less?

[3] This is the case when the parameters are set by natural biological limits and the definition of microevolution is compatible with the concept of Variation within a Biblical Kind. See Ray Bohlin and Lane Lester, The Natural Limits to Biological Change, Probe, 1989, and Scott Huse, The Collapse of Evolution, Baker Books, 1997.

[5] Daniel Janosik, How to Think about Evolution and the Fossil Record of Man, CIU, 2001.

Click below for a published PDF version of this article: 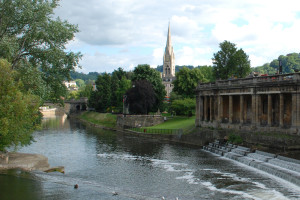 The Bible is Accurate and Trustworthy

As I stood on the stool overlooking the large crowd gathered in London’s Hyde Park, Muslims were gathering to oppose me.  I had barely begun to proclaim truth, when they tried to drown me out with their shouts.  This is not an unusual scene.  Speaker’s Corner in the northeast section of the park has been an historic, world-renown open-air venue for the exchange of ideas since the 1860s.  The exchange is sometimes heated, especially when it comes to proclaiming truth.

That day I questioned the historicity of the Muslim’s holy book, the Qur’an. Immediately, several jumped in and boldly asserted that the Bible could not be trusted because it has been corrupted and the true gospel of Jesus Christ had been lost. This is a stalemate that I have often faced and I proceeded to ask them two questions that usually cause them to change the subject: When and how were the Christian Scriptures changed? Most Muslims know very little about the history of the Bible and therefore seek to change the subject when they are asked these two simple questions. Rather than letting them change the subject, I presented to them three tests that validate the historical claims of the Bible. These are the Bibliographic test, the Internal Witness test and the External Witness test. My goal was to demonstrate that the Bible, which actually predates the Qur’an, is not only historically accurate, but it can be fully trusted as the true word of God.

This first test determines whether the text we have now is essentially what was originally recorded. Ancient documents are very rare due to the media that they were written on. In fact, we do not have any original manuscripts of any of the biblical documents from either the Old Testament or the New Testament. However, this is also true of any other document of the ancient world. This is why the condition of the earliest copies is so important. We have approximately 24,000 early copies of the New Testament, with over 5,000 of these in the original Greek. When we compare this number to other ancient documents, it becomes clear that the New Testament is in a league of its own.

The best example from the ancient world, besides the New Testament, is Homer’s Iliad, of which we have 643 early copies. This difference may not seem that significant until we also compare the time span of these copies. The shorter the gap between the writing of the original document and the earliest copy, the more reliable the accuracy. For most ancient documents, including those written by Plato, Aristotle, Caesar and others up through the time of the New Testament,  the earliest copies that we have are copies written over 1,000 years later, which means that we are dealing with copies of copies of copies. Even our best example of the ancient world, again, Homer’s Iliad, is dated at 500 years after the original. In comparison to this, we have fragments of John’s gospel which are dated as being copied less than 25 to 35 years after the original. Even the Sinaiticus version, one of our earliest complete copies, is dated within 300 years of the original documents and over 300 years before the beginning of Islam. Again, this is very significant for an ancient document. In fact, Bible scholar Norman Geisler confidently concludes that “there are earlier and more manuscripts for the New Testament than for any other book from the ancient world.”

The next test, the Internal Test, is used to determine whether the written record is a credible witness of the events. The support for the veracity of these events comes from such things as eyewitness accounts as well as from the fulfillment of hundreds of prophecies from the Old Testament. For example, John testifies in his gospel that he was an eyewitness to the events and his testimony was true (John 21:24). By itself this does not mean anything, but as it is confirmed historically and archaeologically (the external test), then his case is strengthened. The fulfillment of prophecy is also used to validate the accuracy of the prophecy, which in turn validates the prophet as well as the God of the Bible!

Finally, the External Test determines whether other historical material confirms or denies the claims of the documents themselves. This is where the claims of archaeology, science and historical accounts either substantiate the Bible or try to deny its accuracy. My favorite example of an archaeological account is the story of Ebla. Over 100 years ago skeptics claimed that the Bible was inaccurate because it mentioned the Hittite people, who were unknown outside of the Bible. However, in 1972 the center of the Hittite empire, Ebla, was discovered at an archaeological site in Syria and the Bible was vindicated again. In fact, one archaeologist maintains that “It may be stated categorically that no archaeological discovery has ever controverted a Biblical reference.”

These tests, which have been proven to have the highest degree of accuracy and reliability, are those to which we must look to when establishing the central doctrines of our faith.  The evidence reveals that our Bible has not changed and, therefore, those who claim it has been corrupted must be wrong.  We can trust our Bible!